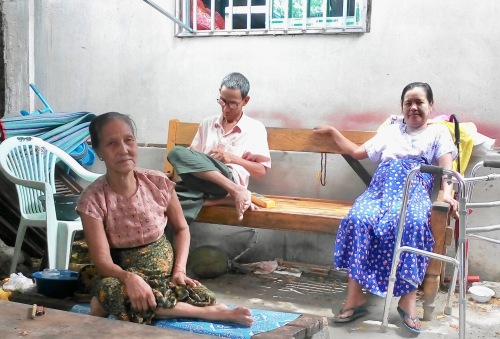 Although Thingazar Chaung as a settlement has been in its current location since the time of Alaungpaya, the founder of Konbaung dynasty in the middle of the 18th century, little has been written about this neighbourhood. It remains on the periphery. When King Mindon founded Mandalay, the last Burmese dynastic capital, in 1857, Thingazar Chaung was outside of the official city, west of the two chinthe (mythical lions) that guarded Mandalay. Today, Thingazar Chaung is largely seen as an undesirable neighbourhood full of squatters and illicit trade, and where in 2018, a private high school dumped its trash with little concern (posted on Facebook by Soe Tint Aung on 19 August 2018).

This neglect is noteworthy. Our interviews suggest that some current residents of Thingazar Chaung are the progeny of former palace servants under King Thibaw, the last Burmese monarch. This is significant because Myanmar pundits have been retrieving the past in order to formulate a national identity and much of that effort has been focused on the history and culture of the Konbaung and Pagan dynasties.

As an introduction to Thingazar Chaung, let us tell you about Daw Bo Ma, an elderly woman who vividly recalls her childhood in this neighbourhood and the stories told by her grandparents. Below is a slightly edited transcript from 2 May 2018, when we asked her and her neighbors: “Is this your zadi (native place)?”

This is our zadi. Our grandparents were servants within the palace when Thibaw as still king. When King Thibaw was taken away, our grandparents fled from the palace and squatted in this area. Although there was water all around this place, they believed it would not flood. From that time, groups of people gathered here. There were also other servants who fled to the area around Mingaladanda and Mingalazay… One of our grandparents had to prepare betel nut for Queen Supayalat and another had to coif her hair. It was forbidden to look directly at the queen. You had to get special permission first. One of the grandmothers accidentally looked at the queen so her pinkie finger was cut off.

Other women expressed similar attachments to Thingazar Chaung based on historical relationships that stretched back in time, beyond their own lifetimes. More oral histories will need to be collected in order to verify this claimed connection to the last imperial court of Burma and other aspects of Mandalay’s past.

SEANNET program is funded by the Henry Luce Foundation, New York. The contents of this website are the sole responsibility of UKNA and can in no way be taken to reflect the views of the Henry Luce foundation.