Locations of all SEANNET case studies

The neighborhood around the northern end of the Thingazar Chaung (channel) was likely settled after the British colonial government relocated and consolidated approximately six monastic orders into one compound. Since the late 19th century, a thriving neighborhood has grown up around the monastic complex and is now a mixed income and mixed-use area that houses … END_OF_DOCUMENT_TOKEN_TO_BE_REPLACED

Chiang Mai is the largest and most culturally significant city in Northern Thailand. It is the capital of Chiang Mai Province. It is 700 km (435 mi) north of Bangkok and is situated amongst the highest mountains in the country. The city sits astride the Ping River, a major tributary of the Chao Phraya River. Wua-lai is … END_OF_DOCUMENT_TOKEN_TO_BE_REPLACED 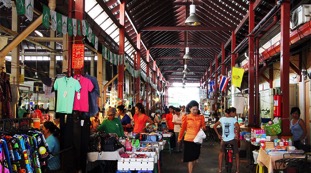 Bangkok  is the capital and most populous city of Thailand. The has a population of over 8 million, or 12.6 percent of the country’s population. Over 14 million people (22.2 percent) live within the surrounding Bangkok Metropolitan Region, making Bangkok an extreme primate city, significantly dwarfing Thailand’s other urban centres in terms of importance. Located … END_OF_DOCUMENT_TOKEN_TO_BE_REPLACED

Manila is the capital of the Philippines. Founded on June 24, 1571, by Spanish conquistador Miguel López de Legazpi, it is one of the oldest cities in the Philippines and was the seat of power for most of the country’s colonial rulers. It is situated on the eastern shore of Manila Bay and is home … END_OF_DOCUMENT_TOKEN_TO_BE_REPLACED

Surabaya, is the capital of Jawa Timur (East Java), located on northeastern Java island and the second-largest-city in Indonesia. The national government recognizes only the continuous core metropolitan area (Surabaya, Gresik and Sidarjo) as Greater Surabaya (Zona Surabaya Raya) with a population of 6,484,2060 (2010), making Surabaya now the third largest metropolitan area in Indonesia, … END_OF_DOCUMENT_TOKEN_TO_BE_REPLACED

SEANNET program is funded by the Henry Luce Foundation, New York. The contents of this website are the sole responsibility of UKNA and can in no way be taken to reflect the views of the Henry Luce foundation.