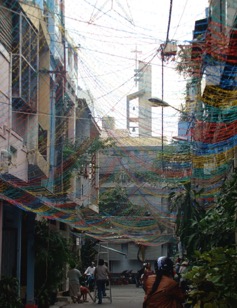 Wards 13 and 14 of Phú Nhuận district are very central in the metropolis; they illustrate well the many layers of identity in the city’s historical development. The neighborhood’s strong local identity is linked to the Catholic community that settled in the area in the 1950s following their escape from the communist regime in northern Vietnam. Once a swamp along the Nhiêu lộc canal, the zone was progressively upgraded in the ensuing decades and, as the metropolis expanded, became more and more central. Many families have resided in the local alleyways for several generations and are still active in the local Catholic community. The neighbourhood counts numerous churches and religious symbols in its alleyways and the local catholic authorities also continue to play a daily role in the management of poverty alleviation programs for instance.

The southern border of wards 13 and 14 are defined by the edge of the Nhiêu lộc canal, whose banks and canal-side road were upgraded in the past years and have become a bustling commercial space lined with popular eateries, cafes and other businesses. A linear park that serves leisure needs for residents in one of the densest areas of the metropolis has also been built alongside the canal. Today, this project is widely celebrated as a symbol of Ho Chí Minh City’s metropolitan renewal. Recently, newly renovated adjacent alleyways, whose names were historically associated with a street called Huỳnh Văn Bánh to the north, have chosen to take the name of the canal-side road – Trường Sa – which clearly symbolises how the neighbourhood wishes to be associated with the upgraded canal. With the rise in coffee shops and restaurants attracted by the renewed canal area, wards 13 and 14 are increasingly becoming a dynamic peri-central area, facing new development pressure, challenging both its historical urban pattern and socio-cultural identity.

The catholic identity of the neighborhood (Source: Dr. Marie Gibert)

Aerial photograph of Wards 13 and 14, around Tân Hoà church, a landmark in this catholic neighborhood (Source: Google Maps)

Join 71 other subscribers
SEANNET program is funded by the Henry Luce Foundation, New York. The contents of this website are the sole responsibility of UKNA and can in no way be taken to reflect the views of the Henry Luce foundation.